Virtual Private Networking (VPN) at the University of Maryland

What platforms are supported?

What is a VPN?

VPN is an acronym for virtual private network. A VPN provides an encrypted and secure connection "tunnel" path from a user's machine to its destination through the public Internet.

Why would you want this?

The VPN client software encrypts the data stream so that only the VPN server can understand it. This provides a method for secure communications, a feature especially relevant for wireless connections. Its use also allows your machine to appear to be connected directly into the University network, even though you're actually connecting through an Internet Service Provider (ISP). This, in turn, permits access to restricted-use sites and to University Simple Mail Transfer Protocol (SMTP) servers for sending emails.

How does it work?

As shown in the diagram below, standard Internet connections go from your machine to your ISP, through the Internet and on to the site of your choice. At any point along the connection path, the data stream is open to packet sniffing, (that is, the data can be intercepted and read). 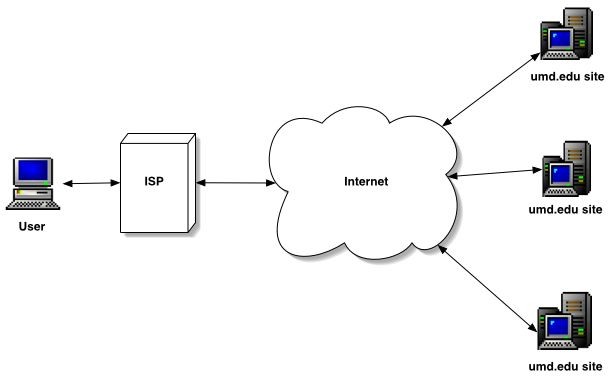 Using a VPN, as in the next diagram, the connection path runs through a "tunnel," isolating the data stream from the Internet while still remaining part of it. It connects to a VPN server which decrypts the data, provides authentication, and acts as the gatekeeper to the campus network. Because the campus network sees the VPN server as the source of the communication, your connection is considered to be direct to the network rather than from the outside.

Do I need anything special in order to use the VPN?

In order to download and use the VPN client software, you will need to have a University of Maryland (UMD) Directory ID and Passphrase. This is to ensure that only active members of UMD can use this service.

Unfortunately, no. Due to the wide variety of ISP technologies, connection methods, and software configurations, there may be instances where the client is simply incompatible and won't work as required. Be assured, however, the Service Desk will make every effort to see that such instances are reported and analyzed in order to identify a possible fix or workaround.