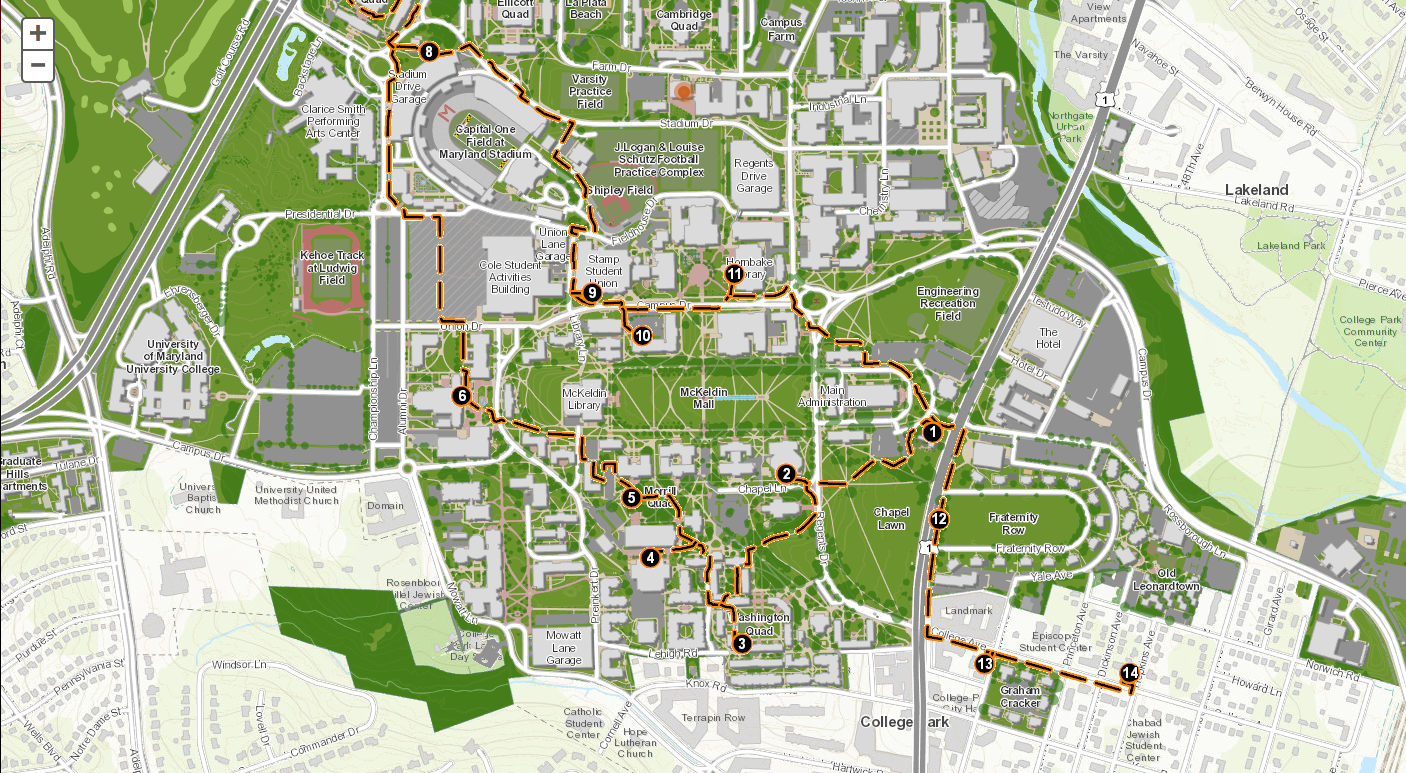 Marie Mount Hall - At one time, Miss Mount supposedly lived in the building in a special dean's apartment. There she allegedly plays the piano on stormy nights in the hall named for her, and members of the Maryland Ghosts and Spirits Association detected the presence of several other spirits in Marie Mount Hall during an investigation in October 2002. Doors were opening and shutting on their own, toilets flushing when no one was there, and matches blowing out when all the doors and windows were closed. Is one of our most notorious haunted buildings?

You might have walked by a hundred times and never noticed, but there's a cemetery on campus. The McNamee family sold the university part of its land in 1938, which included its family cemetery. It's since been bricked over to prevent people from disturbing the graves. Or is it to keep those in the graves from disturbing us?

Rossborough Inn in 1981, during renovations to the building, several weeks later, and a waiter at the Inn saw the same woman, dressed in yellow. The inn has been the site for other unexplained occurrences—a vase of flowers appearing on its own, footsteps overhead when one is alone, a face peering out of an inn window when the building is unoccupied. A Confederate soldier has also been spotted on campus, an echo of the occupation of the campus by Confederate and Union troops during the Civil War. Two men apparently dueled near the hitching post in front of the Rossborough. To one of the third floor rooms and died there.  Blood supposedly stains the floor of one of these rooms. Other members of the campus community report hearing the sound of marching feet near

Morrill Hall- the location of a portion of the drill ground utilized by the Maryland Agricultural College cadets in the college's early years. Spirits have also been detected in where workers found human remains under a sink while the building was undergoing renovation, mysterious smells drilling had released fumes and ashes left over from the disastrous Thanksgiving weekend fire of 1912, and ghosts are rumored to inhabit. The building was originally called Science Hall when it was constructed, and some people believe that cadavers were dissected in the bowels of this Victorian structure.

Easton Hall- Is haunted by a freshman who committed suicide jumping out an Easton Hall window in the 1990 still haunts the eighth floor.

Pyon Su, the first Korean student to graduate from an American college or university, attended the Maryland Agricultural College from 1887 to 1891, lived on campus. Express train quickly passed through the station and fatally injured him, purposefully took his life because he could never return to his home country.

Alpha Omicron Pi (members have seen or heard the ghost of Julie Renee Peace - a sorority sister who died in a tragic 1995 car accident), tales of music playing without warning or human intervention and computers operating on their own.  Racks of accessories have also fallen over unaided, and at least one sister has seen a set of red eyes staring at her.

Kappa Delta (first sorority-known as Sigma Delta) - Alma Preinkert's soul may still be unsettled, because members of the campus sorority she helped found; Preinkert awoke to find an intruder in her house.  She apparently tried to stop the man, who was ransacking her home, but the struggle led to bloodshed.  Preinkert was stabbed multiple times and eventually succumbed to her wounds.

Delta Tau Delta House -fraternity brother Dan Carroll was killed in an automobile accident in 1955. Witness's furniture moving around in the house on its own accord, and a cabinet belonging to the deceased brother always maintained an interior temperature markedly warmer than the surrounding room temperature.  The brothers have even reported seeing reflections of a person's face in a blank television screen when no one else was in the room.

Washington Hall- Len Bias, whose ghost is still rumored to bounce basketballs in his former dorm.

Tawes Fine Arts- spirit haunt this building; one is something called Mortimer who supposedly is a ghost of a former student killed in the Vietnam War.

Capital One Field at Maryland Stadium- a spirited racer circling the interior of the stadium causing a puff of dust to appear out of nowhere.

The Stamp Student Union- building has turned into a vast maze of various floors, oddly connected hallways, strange stairways, and confusing floor plans, leading visitors to unexpected destinations. While trying to navigate the building, some visitors have encountered elevators that move suddenly on their own and abrupt, unexplained cold spots that can chill you to the bone.

H. J. Patterson Hall (Steinberg Castle) - a campus employee entered H. J. Patterson to complete some routine maintenance work.  He made his way up to the attic and began his labors.  As he was working, he felt an eerie presence enter the room.  When he looked around, he saw a strange, misshapen shadow dart across the wall.  The worker insists that he was alone and that the shadow could not have been another maintenance worker.

The Diamondback Office- a hardworking ghost may haunt The Diamondback office, located upstairs in the South Campus Dining Hall building: Books that were usually stuck on the shelves have been rearranged, and the managing editor's papers and clutter have been organized when nobody with keys to the office was around.